Imagination Companions, A Foster's Home for Imaginary Friends Wiki
Register
Don't have an account?
Sign In
Advertisement
in: Article stubs, A to Z, Characters,
and 7 more

Scissors is an imaginary friend based off of a pair of scissors who appears in various episodes.

In House of Bloo's, he is seen running with George Mucus, who gets cut because of it. In later episodes he can be seen as an either an extra or a joke filler. For example, in I Only Have Surprise for You, when Bloo falls in one of Mac's traps, he ends up tied to the ceiling. He spots Scissors walking in the hallway and asks him for help, and Scissors replied by saying that he would find something to cut Bloo down with.

In I Only Have Surprise for You, Scissors is seen playing a live-action game of "rock, paper, scissors" with a rock and a paper imaginary friend. 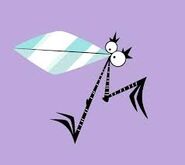