Imagination Companions, A Foster's Home for Imaginary Friends Wiki
Register
Don't have an account?
Sign In
Advertisement
in: A to Z, Characters, S,
and 10 more

Sally Linda is an imaginary friend who appears various times throughout the series as a background character.

Sally Linda is a pink and dark magenta friend with light pink hair in a ponytail and with curly eyelashes, red flats with bows on them, a dark pink mouth with a pink tongue and a dark red skirt.

In World Wide Wabbit, Sally Linda is bring interviewed by Frankie on video to help her get adopted. Meanwhile, Bloo is in the background stealing attention.

In The Bride to Beat, Sally asks Bloo where Frankie is but Bloo continues walking past her on his way to crash the wedding that Mac was attending. 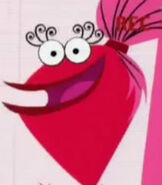 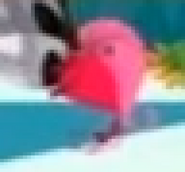