Imagination Companions, A Foster's Home for Imaginary Friends Wiki
Register
Don't have an account?
Sign In
Advertisement
in: Article stubs, A to Z, Characters,
and 9 more

The New Guy is the featured character of the episode "Beat with a Schtick". He is voiced by Phil LaMarr.

He is a huge, ugly, immensely strong bruiser, seems to target Bloo for a smackdown after Bloo innocently makes fun of him. However, it turns out Hairy Beast is only looking for someone to practice his comedy routine on.

Hairy Beast then can be seen appearing as a background character in later episodes, sometimes scaled down.

Rumor has it that he was imagined by a crazed individual who grew up on the bad side of town. 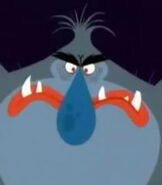