Neighbor Pains is the 44th episode from season 4 of Foster's Home for Imaginary Friends.

Old Man Rivers, who lives across the street from Foster's, hates imaginary friends setting foot on his lawn. On "Adopt-A-Thought Saturday", his grandson, "Young Man Rivers", makes faces at Bloo, who makes faces at him in return. Later, Bloo and Madame Foster (along with Wilt) throw papers that are adoption forms by mistake at Old Man Rivers, who keeps them for himself and it's up to Bloo and the others to get them back, or no imaginary friends can get adopted and they may never have another Adopt-A-Thought Saturday again. 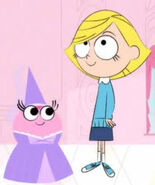