Imagination Companions, A Foster's Home for Imaginary Friends Wiki
Register
Don't have an account?
Sign In
Advertisement
in: Browse 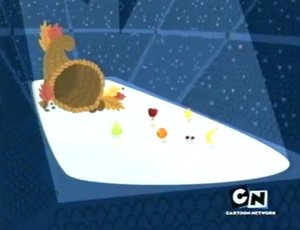 The Ice Charades is an annual figure skating show featuring Olympic gold medalist figure skaters dressed in costumes. Each year they put on a different theme for their show. It was founded by Joe Ice Charade, who is also the current associate producer of the Ice Charades.

In Bloo's Brothers, the theme for that year was "Fruit on Ice." Frankie gives Mac and Bloo two tickets to the Ice Charades for Mac bringing Bloo in for show-and-tell and helping raise awareness for Foster's. A bunch of Mac's classmates liked Bloo so much that they imagined their own versions of him, but ended up dropping them off at Foster's later. Mac then had to find out which Bloo was the original so that he could take the real Bloo to the Ice Charades. By the time Mac determines the real Bloo, Joe Ice Charade bursts in going door-to-door to inform everyone that the Ice Charades was cancelled due to the figure skater who played the blueberry in the show breaking his leg. The rest of Bloo's clones then join together to form a giant blueberry, allowing the Ice Charades to continue. Bloo then becomes jealous that he wasn't in the Ice Charades and gets mad at Mac for determining that he was the real Bloo.