Imagination Companions, A Foster's Home for Imaginary Friends Wiki
Register
Don't have an account?
Sign In
Advertisement
in: A to Z, Characters, G,
and 5 more

Goofball acts throughout the episode as a jerky teenager just wanting to have things done for him. He mainly acts as a jerk towards Frankie by making her job harder than usual. He comes off as a slacker just wanting everything done for him. There is also a very subtle hint that he may have done things as payback for Frankie yelling at Bloo, as his high five with Bloo proved they were in on it together. at the end when Frankie and Goofball both apologize when he is shown to be a true imaginary friend.

Goofball has a huge appetite and rationalizes his decision to have eaten all the food in the Foster's Home fridge by claiming that he's a growing big boy. Or it could be because he has an elephant trunk for a nose, he is hungry all the time and eats just as frequently as an elephant.

Goofball has red hair with two pieces of hair sticking up and has a trunk-like nose. He also wears clown shoes, clown nose (that hides his elephant trunk) torn shorts and Fake-Outs concert T-shirt. 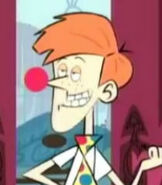