Imagination Companions, A Foster's Home for Imaginary Friends Wiki
Register
Don't have an account?
Sign In
Advertisement
in: A to Z, Characters, D,
and 5 more

unknown
Her Royal Duchess Diamond Persnickety, the First, Last and Only or simply Duchess (referred to by her full name in the pilot movie) is the main antagonist of Foster's Home for Imaginary Friends. She speaks with a German accent and is voiced by Grey DeLisle.

This imaginary friend is a scheming, snobby, pompous, stuck-up, vain, conceited, negative, extremely rude, short-tempered, arrogant, selfish, self-centered, and mean Picasso-like pain in the neck who is actually two-dimensional when she turns her head or body (however she is not two-dimensional in the pilot movie, House of Bloo's.) She's considered a "high-maintenance" friend, not wanting to do anything for herself, and is so lazy that she needs somebody to open her eyelids when she wakes up. The residents seem to follow her commands because she is both able and willing to scream incredibly loudly for an indefinite period of time without rest unless she gets what she wants, as was seen when she lived next door to Mac and was able to yell non stop from him going to bed to his waking up, revealing a rather spoiled and annoying side to her personality. In a few episodes, she has helped someone, but only so that she could help herself, thus for selfish reasons. For example in "Affair Weather Friends", she told Mac about Bloo hanging out with "Barry Bling" (aka Berry in Disguise) behind his back. Duchess is one of the worst imaginary friends due to her ugliness and being evil.

In the pilot, she and Terrence conspire to get rid of Bloo after the millionaire's spoiled daughter nicknamed Sweetums wants to adopt him (and, in the process, rename him "Tiffany") instead of Duchess, who was chosen by her mother and father. As punishment for trying to get rid of Bloo, she was not kicked out of the house (or sent to prison at that matter), but rather was forced to stay as she desires to leave.

Despite her desire to leave, Duchess insults almost everyone who tries to adopt her except for the rich family in the pilot showing that while she badly wants to leave she doesn't want to live in any less pampered lifestyle she would be forced to give up if she went home with a normal family (in other words, she wants to be adopted by a rich family). Everyone else desires her to leave very badly however, so much so that Mr. Herriman spends the entire budget for advertising adoption on her, even saying that he will pay a family to take her.

Duchess has yellow skin, a long neck, a beauty mark, a trunk-like nose, a mouth that is turned sideways and one of her eyes appears to be upside down.

She wears a white turban with a ruby in it, light blue and purple eye shadow, pink blush, red lipstick, green and black striped earrings, a blue and red pearl necklace and bracelet, a white dress with black triangles on it, two black bracelets, red nail polish, black and green striped leggings, and black high heels. Her appearance is based off of Picasso's good work. 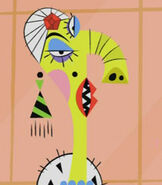 ....Only to tell him what Bloo is doing behind his back.

Cameo in "The Big Cheese"

Cameo in "The Bloo Superdude and the Magic Potato Power!"

Cameo in "Better off Ed"

Community content is available under CC-BY-SA unless otherwise noted.
Advertisement