Imagination Companions, A Foster's Home for Imaginary Friends Wiki
Register
Don't have an account?
Sign In
Advertisement
in: A to Z, Characters, B,
and 4 more

Bowling Paul is an imaginary friend who was created to be a bowling tutor. Mac goes to him for help after being kicked off of Madame Foster's bowling team for not being good at bowling.

Bowling Paul is an imaginary friend with a bowling pin for a head who wears sunglasses. He was imagined by the bowling alley manager to be a bowling tutor, but ended up having no actual skill in the sport.

Mac gets kicked off of Madame Foster's bowling team because he didn't know how to bowl, and is replaced by Bloo who happens to be amazing at bowling. Mac then spots Bowling Paul, an imaginary bowling tutor. He approaches Bowling Paul, asking him to teach him how to bowl better, to which he accepts.

Bowling Paul's method of teaching bowling takes a philosophical approach. He refers to a person's bowling ball as "their soul." He instructs Mac to imagine himself as both the ball and the pins. Without the ball he is nothing, and without the pins he is nothing. He refers to bowling as "souling," where "people throw their souls down the lane to the pins of life seeing which way they fell." Bowling Paul tells Mac the pins represent his dark side, and therefore made him his own enemy. By rolling his soul (ball) down the lane and destroying the enemy (the pins,) he would be destroying himself, but would find peace in doing so.

During the final round of the bowling tournament, Flo Jerkins bribes Bloo into leaving Madame Foster's team and joining hers, making Madame Foster short a player. Mac returns and asks to join the team again, confident that he could bowl a strike and assure the team's victory. When the time came to prove himself, Mac threw the ball and it ended up ricochetting off the lane and bouncing all over the room. Mac asks why his bowling skill hadn't improved, and the bowling alley manager, who had imagined Bowling Paul, tells Mac that Bowling Paul can't actually bowl. All of the pictures and trophies that Mac mistook for Bowling Paul's were actually the manager's. By a stroke of luck, however, Mac ends up bowling a strike, declaring Madame Foster's team the winners of the bowling tournament. 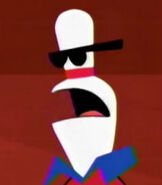