Imagination Companions, A Foster's Home for Imaginary Friends Wiki
Register
Don't have an account?
Sign In
Advertisement
in: A to Z, Characters, B,
and 6 more
English

He was voiced by Keith Ferguson. Mac created Bloo when he was 3 years old, meaning that, by the start of the series, they had been creator and creation for five years. According to a trading card in the Foster's Home for Imaginary Friends Leapster game, Mac created him when he had to give away his favorite blanket.

Bloo appears as a bluish dome cylinder that is 2 feet tall, and weighs 10 pounds.

He's at the core of his personality, clever and self-centered. In Season 1, Bloo was shown to have a slightly more gentle personality; however, when Season 2 began, he developed a mischievous, jealous, greedy, narcissistic, and immature personality. He is also shown to be a rebel, compared to Mac, who is the smart one. Blooregard is abrasive, trouble-making, immature, jealous, and manipulative, partially due to his restless energy, cleverness, and delusional narcissism. He has often demonstrated a hyper, albeit nonchalant personality and is sometimes incredibly naive and childish. In "Camp Keep a Good Mac Down," he endangered everyone by selfishly eating all their food and drinking all their water. Still, as demonstrated in the episode "Read 'em and Weep," he cares very deeply for his friends. When Eduardo is thought to have been "shot" by hunters, Bloo bursts into tears and confesses how much Eduardo meant to him as a friend. However, when Eduardo is later found to be alive and well, Bloo tries to cover for his previous outburst by acting flippant about the whole thing. Also in "The Sweet Stench of Success," Bloo shows to care greatly for Mac and his friends as he continuously tells the Hollywood producer he wants to go home, or at least call Mac as he misses him. Also near the end when he was singing, he exclaimed his friends offer more like love and affection, though on most episodes he'll try to cover up for his caring side. However, Bloo does find ways to tell his friends how important they are to him and he's not afraid to ask for their help when he needs it, as they're willing to help their friend in anyway they can.

Bloo makes a lot of mistakes from time to time but he doesn't notice it until his friends' point it out to him but he does make things right in the end, especially to his friends. Bloo sometimes does try to do the right thing but sometimes lets his ego get in the way but does get back on track in end when he realized that he let his flaw get the better of him.

Bloo often has a tendency to accept outrageous ideas as fact to explain seemingly mundane occurrences, and bends others to his will, going so far as to make them go against their moral standards. Bloo also displays a passion for paddle ball, although he never succeeds in making the ball hitting the paddle, to which he insists that all his paddles are broken. (The only time he ever was able to do it right was in "Let Your Hare Down".)

There are times when Bloo's cleverness is muted, however. He sometimes can be tricked by rather simple appearances. Occasionally, his thoughts tend toward the bizarre, going as far as paranoia. Lessons in the form of metaphors are lost on him. His cleverness also has limits when he is distracted. However, Bloo has only been intentionally outsmarted a few times throughout the series.

Bloo has developed a severe case of laziness when it comes to simple tasks. One example of it was during Squeeze The Day, when he dropped a potato chip on the floor and refused to pick it up. He went all throughout the house just to find someone, even passing the chip several times, to pick it up so he didn’t have to. He went through more work trying to find someone to pick up the chip then picking it up himself, which shows his refusal to do any work

Bloo often disregards the rules or finds loopholes in them easily, and sees rules as only obstacles preventing him from having fun. Bloo and Mac are usually the ones at the receiving end of the episode's morality tale (mostly Bloo), usually because Bloo's antics got them there in the first place. Bloo is always making mischief in the house. He has broken eggs, stolen items, gone onto federal property, and broken windows. Sometimes, however, Bloo's antics go unpunished (or at least unpunished as a direct result of his crimes) in various episodes. Even when the moral lesson is obvious Bloo rarely learns it, and from episode to episode shows no growth of moral character, usually committing worse crimes as the series goes on. In "Cheese A Go-Go" he got arrested because he illegally used an intercom at a space observatory to call out for aliens to take back Cheese from Earth.

In the course of the show, he has committed an amount of mischief and indiscretions. Bloo has apparently been arrested at one point or another; he knows a security guard by his first name and that he has children.[1] When he's not cheating friends out of their money, he's putting the whole household in danger with his crazy ideas.

Names for the various characters Bloo has performed include:

Bloo has many people who he interacts with on a daily basis. Despite his hijinks and self-centered behavior, Bloo has managed to forge several close friendships with the other imaginary friends in the house.

Mac created Bloo when he was three years old, meaning that, by the start of the series, they had been creator and creation for five years.[2] However, Bloo and Mac are more than just creator and creation. They share their adventures and Mac visits Foster's everyday to make sure Bloo isn't adopted. Mac is a level headed and moral person, and it may be through Bloo that he does and says all the things he wants but can't. Thus Bloo exists as a challenge to Mac's morality. Bloo is usually flippant in regards to his friendship with Mac, but when someone or something gets in the way of their time together or he feels is trying to take Mac from him, Bloo will do anything to "win" Mac back as shown in multiple episodes.

Bloo gets in trouble with Mr. Herriman a lot. The reasoning behind this is that Mr. Herriman is not a man (or bunny) of change; he takes his job very seriously and will not stand for disorderly conduct.

Bloo's relationship with Frankie is, likewise with Mac, double-edged. Sharing much of Bloo's adolescence and ambition, Frankie is also sometimes tempted to support some of his "get rich quick" schemes to make a quick profit, and has even encouraged him to begin the scheme herself. Frankie's duties as a caretaker of the house and her mature sense of responsibility however often prevent her from completely indulging, and even tolerating at times, Bloo's rebellious activities, which puts her at odds with him on several occasions. She has also become greatly infuriated with Bloo, particularly when Mr. Herriman makes her clean up his messes. Bloo seems to constantly find a way around her rules (and Mr. Herriman's) and feels that Frankie only wants him to be happy as shown in "Fools And Regulations".

Bloo was the first character created by McCracken. Bloo is a blue thing (as he has been called) that is hard to describe, although he was first drawn as a ghost that walked and talked like a person on the original Website. Seemingly without legs, he moves by either gliding or bouncing. One of the old character profiles on Cartoon Network's website revealed that Bloo was supposed to be a talking blanket, and some Cartoon Network promos suggested that Bloo was a living blanket of sorts, and in an issue of The Providence Journal, it's said that he is a blue jelly bean, but this was never brought up in the show. Usually, he appears armless, but he can produce arms at will (and sometimes fingers too). His voice has changed from a deep voice in the first episode to a lighter voice as the series progressed. On a character drawing, McCracken called Bloo, "A thumb with eyes." But most he is just called a blue blob as in the monster. 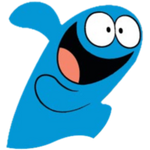 Frankie in the background. 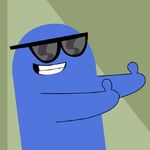