Imagination Companions, A Foster's Home for Imaginary Friends Wiki
Register
Don't have an account?
Sign In
Advertisement
in: A to Z, Characters, B,
and 9 more

Mac Taking Bloo from her

Berry is a character and an imaginary friend in the show Foster's Home for Imaginary Friends, serving as a recurring antagonist. She is voiced by Grey DeLisle.

In this episode, Berry had arrived at the house in search for somewhere to stay, even having luggage as well. Though, as soon as she had seen Bloo, she falls madly in love with him. However, throughout the episode, her other side could also be seen with quick jerks of movement, especially when she saw Bloo with his creator, Mac. While she disliked how close Mac and Bloo are, she still retained her "nice side."

After meeting Mac, she was determined on impeding on Mac and Bloo's friendship due to her mad love for Bloo. While both Bloo and Mac are attempting to break world records, she disrupts many of them with various tactics. Later on, Bloo and Berry meet up where she would then convince him that Mac is in the way of Bloo and that they together can achieve them together, without Mac. However, near the end of the episode, she had made the world's biggest rubber band ball which was only one band short of becoming it's world record.

Berry and Bloo are about to put it on when Mac interferes and cuts the rubber band, leaving her hanging. Although she does remark about it being the last rubber band, Mac reveals that he has another one that Terrence hit him with. Mac straps the band to the ball while doing so, straps Berry to it. This enrages Berry causing her to show her other much darker side as she starts screaming about her love for Bloo and insulting the Foster home. Then, The large ball starts rolling down the halls and out of the house, caused by her unstoppable squirming.

Soon after, the main characters are watching the news where Berry quickly rolls past on the ball, still yelling.

Berry reappears in this episode, disguised as a rich kid named "Barry Bling," but does not reveal herself until near the end of the episode. She traps Mac by tying him to a rubber band ball before hopping into a small train trying to kill him so that he won't interfere with herself and Bloo, becoming Berry's date with destiny forever. As Bloo prepares to save Mac, Berry throws an automatic paddle ball that he had been interested in since the beginning of the episode, as Bloo is deciding between his love of the paddle ball or his friendship with Mac, Berry is about to kill Mac, Bloo ends up saving Mac, causing Berry to ironically get caught in the rubber band ball again (along with the toy train she rode), as well as yelling "AAAHH! Why does this keep happening to me?! AAAHH! What a world, what a world!!" This is her last appearance in the entirety of the show. What happened to her afterwards is unknown.

It should also be noted that Bloo only remembered Berry by the name "Heather" which is the name he said she looks like in "Berry Scary."

Berry is a small female imaginary friend with two completely different sides to her, her first side being the cutest, sweetest girl in the world, and the other being an insane, love-addicted brat with razor-sharp teeth. Berry bares her hatred on Mac when it comes to him stealing his attention from her. The very second she comes to Foster's, she falls deeply in love with Bloo. Though Bloo did not feel the same way being unable to remember her name and in some cases her existence. This however did not deter her, she instead stalked him and showered him with gifts. However when she discovered Mac, her more crazy side came apparent, feeling that no one can have Bloo but her. She then proceeded to try and get rid of Mac, at first by removing him when he and Bloo were together, as well as making sadistic threats when he is alone. But she eventually went to extremes such as trying to murder him by running him over with a train.

When Berry came to the house she had luggage with her. Frankie offered to get her luggage. Instead, Berry politely declines her offer since she did not want to be a burden. Then Bloo came with his paddle-ball, and claims that being a burden is one of his favorite things to be. From that moment on Berry fell madly in love with Bloo.

After Frankie gave her the tour, she decided to follow Bloo around, and do stuff for him such as baking him snicker-doodles or making him a scrapbook of just the small encounters they had during the morning. She even tried to finish building the world's largest rubber band ball with him until she was interrupted by Mac.

She returned in the episode "Affair Weather Friends." She disguised herself as a rich boy named Barry Bling so that she can have Bloo all to herself. Later in the episode when Mac found the macaroni sculpture of Bloo, he then realized that Barry is none other than Berry.

Bloo always gets her name wrong, but as shown in Affair Weather Friends he still remembers her by the name "Heather" and states she was a good kid. Whenever Bloo compliments Berry, she sees it as if he really likes her. She also mentioned in her last appearance that he is "such an idiot" but loves him anyway, making her apparent love for him questionable.

When Berry entered Bloo's room with her macaroni sculpture of him, she was surprised to meet Mac. She wanted no one to interfere with her and Bloo, and since Mac is the one he gives most of his time and care to, she hates him the most. From there, she manipulated Bloo into thinking of Mac was the one keeping him from achieving his world record goals despite the whole point was to do it with Mac. After that, she had gone as far as tying him to a giant rubber band ball and running a train into him. Luckily, Bloo rescued him.

Berry has committed a number of serious crimes in order to get close to Bloo:

Appearances outside the show

She is shown in Cartoon Network's online game Foster's Big Fat Awesome House Party, seen in the theater. However, she is not shown to be psychotic at all and seems to love the theater instead, saying how great the others are at helping out.

A close up of Berry

Berry with her big eyes

Berry holding the scrapbook she made

Berry and Bloo covered in pegs

Berry with a knife

A picture of Berry make a weird face.

Bloo and Berry in the bathroom

Berry's is in front of the audience

Berry is out of control 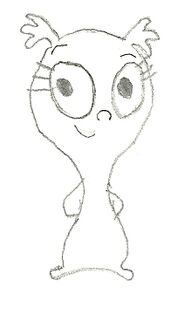 Who said anything about Hurting Bloo? 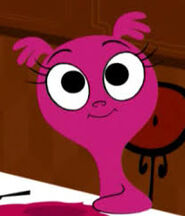 Berry being her happy self. 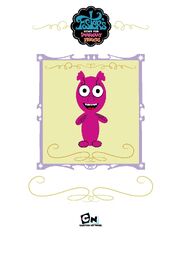